In late 2019, I was asked if I “hated” Tim Donaghy following my ongoing criticisms of his media appearances.  I’ve engaged in hundreds of conversations regarding the NBA betting scandal over a decade and yet no one had ever posed that question to me about the former referee.  After quickly explaining I do not “hate” Donaghy (in truth, it never occurred to me to bother), I realized people apparently don’t know why he is disreputable.

Here, then, are the major problems with using Tim Donaghy as a stand-alone, unverified source.  There are two inter-related issues with Donaghy: he has a lengthy documented history of (1) telling demonstrable falsehoods concerning matters of importance and (2) troubling behavior.

Beyond the objective data (betting lines and records), there’s also a vast universe of informed people who explain there are many crucial Tim Donaghy assertions which are either incorrect or outright falsehoods about the scandal and related matters.

This universe of Donaghy detractors (on the NBA betting scandal alone) includes:

Anyone familiar with my years of work on the scandal knows how much time I have spent on this consequential issue (see., e.g., my latest commentary here).

There are also major longstanding personality issues with Donaghy…

Have you noticed that in a span of a decade you haven’t heard people who know Donaghy say “I can’t believe what he admitted to/has been convicted of doing; that seems so unlike him” or “He’s such a great person” or “I feel so bad for him” and the like?  With that in mind, here is a sampling of issues involving Donaghy over the years (and please note, as I explain in Gaming the Game, some of these matters informed and influenced decisions in the federal NBA betting scandal investigation and prosecution):

Please also consider what reporters looking into these circumstances have discovered when they reached out to former Donaghy teammates, classmates, colleagues, and associates…

Donaghy’s troubling behavior has continued and he has privately and publicly lashed out against many parties, making baseless claims in the process.  He also – unsolicited – publicly mocked his ex-wife’s appearance in response to a 2019 ESPN article about the scandal: 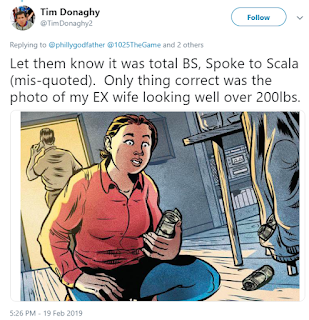 So, with the collective decades-long evidence of lies and falsehoods and frauds, along with an unreal history of troubling personal behavior*, you can hopefully understand why many people like me can’t understand the routine, often genteel, manner in which some media personalities treat the discredited and disturbed Donaghy.

*I haven’t humored above other issues such as Donaghy admitting having someone take his SATs for him, allegedly cheating on his wife, allegedly using prostitutes and drugs with co-conspirator Tommy Martino during the scandal (as Martino claims), in addition to repeatedly defrauding his employer, etc.

September 2022 update: Now that the Netflix “Untold: Operation Flagrant Foul” episode on the 2003-07 NBA betting scandal has aired, which includes Tim Donaghy’s ex-wife on screen explaining the impact of his actions on their family, it may be helpful to add to the above.  “Untold” viewers will note his ex-wife makes no personal or disparaging comments about Donaghy, the father of their children together.  This, of course, is in stark contrast to Donaghy’s public comments, which also include what he volunteered to Pat McAfee in 2019.

Speaking of the “Untold” episode based on/featuring Donaghy, it is of note someone involved in the production explained he considered Donaghy a “psychopath” following his time dealing with him.  My immediate reaction to hearing this was to dismiss it as hyperbole, even though many others have called Donaghy a sociopath these last 15 years.  The “Untold” production team member’s comment caused me to look into this (after all this is not my expertise!).  It turns out, according to this page on WebMD, Donaghy most likely is a psychopath.