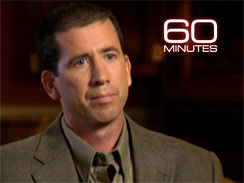 Wow.  ‘Just watched the online preview of the upcoming (Sunday, 12/6/09) 60 Minutes piece on former referee Tim Donaghy.  In particular, I was waiting with interest for the “Mob” comments dominating today’s NBA scandal-specific news cycle (resulting in part from the brief AP story linked below, but mostly from the CBS story headlined “Ex-NBA Ref Tim Donaghy: Mob Threatened Me”).  Talk about misleading – or worse!

I don’t know what was more surreal, watching the video preview or reading the “news” story.  Each is obsessed with the salacious – though incredibly dubious – organized crime angle, and neither mentions the names of the two individuals who visited Donaghy at the PHL airport Marriott in December 2006.

When I saw today’s headline re: “The Mob” threatening Donaghy, I assumed the reference was to his stint in prison during which, according to a Donaghy spokesperson, an “inmate claiming ties to the New York mob beat Donaghy with a heavy object.”  Thus, imagine my surprise when I learned Donaghy was referring, instead, to the fateful December 2006 meeting with his longtime, close friend Tommy Martino and mutual pal, pro gambler Jimmy Battista!  These are the two unnamed men “associated with the Gambino crime family” referred to in the video segment?!  The “news” story may be worse (emphasis added):

When the Mafia learned of his [betting] success, they wanted him to work for them, he says. “They basically told me that I needed to give them the picks and if I didn’t, that it’s a possibility that somebody would go down and visit my wife and kids in Florida,” says Donaghy…He spent 11 months in prison and provided evidence against his mob cohorts.

Thus, Jimmy Battista and Tommy Martino are the mobsters referenced in the hyper headline and throughout the organized crime-obsessed article?  Has anyone at CBS even searched Google for these characters?

On a more serious note, Donaghy told a much watered-down story to the FBI, where he apparently made no mention of Martino.  As the NBA’s Pedowitz Report, quoting a court filing, states (p.24):

“Battista also threatened harm to Donaghy’s family. Battista told Donaghy that ‘you don’t want anyone from New York visiting your wife and kids.’ Over the preceding years, Donaghy had come to believe that Battista had organized crime connections, and so he interpreted ‘New York’ to be the Mafia.”

As reported in the Philadelphia Inquirer, covering the former gambler’s recent interview with Bryant Gumbel, “Battista denied blackmailing Donaghy as Donaghy had claimed.  ‘I never threatened him – I didn’t have to. He was a degenerate gambler,’ said Battista, pointing out that he wasn’t charged with extortion.”

Here’s hoping the full 60 Minutes interview provides some new information, preferably based in part on documents, and that what has been released is not a representative sample of things to come.  Wow.

Tim heads to NY to meet with Donaghy’s attorney & find the FBI agents handling his investigation. Someone high up may have pulled strings to undermine the investigation, even leaking the story to the NY Post.

I would LOVE to know if Tim Donaghy’s defense lawyer, John Lauro, believes half the bullshit he says about this case. Wow. He’s (purposely?) uninformed about key aspects and comes across as just another conspiracy nut.

Tim heads to NY to meet with Donaghy’s attorney & find the FBI agents handling his investigation. Someone high up may have pulled strings to undermine the investigation, even leaking the story to the NY Post.

Full clip of my 9/25/20 appearance with ⁦@beatingthebook⁩ re referee Tim Donaghy and his lifelong best friend and co-conspirator Tommy Martino, who now admits they’ve lied past 10 years. Discussion begins @23:22