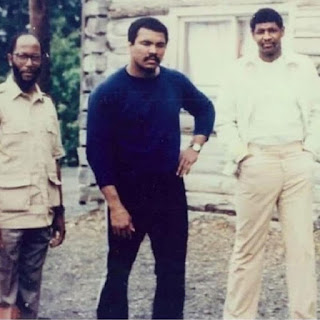 Mims, also known as Ameen Jabbar, died in prison in 2012 while serving a life sentence for his role in one of the city’s most infamous crimes.  In 1971, Mims and some of his Black Mafia confederates robbed DuBrow’s Furniture Store in South Philly, killing one employee and setting many others on fire.  (The robbery/murder/arson is discussed @12:45 in the 2007 BET American Gangster episode,“Philly Black Mafia: ‘Do for Self’.”)  The Ali photo was likely taken while Mims was briefly out of prison following the May 1980 PA State Supreme Court granting of a retrial.

Shamsud-din Ali (then known as Clarence Fowler) served time in prison for murder in the early 1970s until his conviction was overturned.  While in Philly’s notorious Holmesburg Prison, Fowler (like Mims years later in equally-infamous Graterford Prison) was an influential figure inside the institution and on the street.

Shamsud-din Ali garnered national attention in 2005 when he was convicted of various racketeering charges in a massive federal corruption probe in Philadelphia which originated with a drug investigation.  He was sentenced to approximately 7 years in prison and was released in 2013.

Fowler’s/Ali’s ties to the boxing world have spanned decades, as I have documented elsewhere.  As many know, his daughter Lakiha (“Kiki”) is married to another boxing legend, Mike Tyson.

For more on these fascinating and complicated circumstances, see my earlier post on Muhammad Ali and Philadelphia’s Black Mafia and/or: 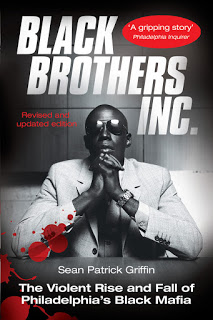