The media and crime rate reporting 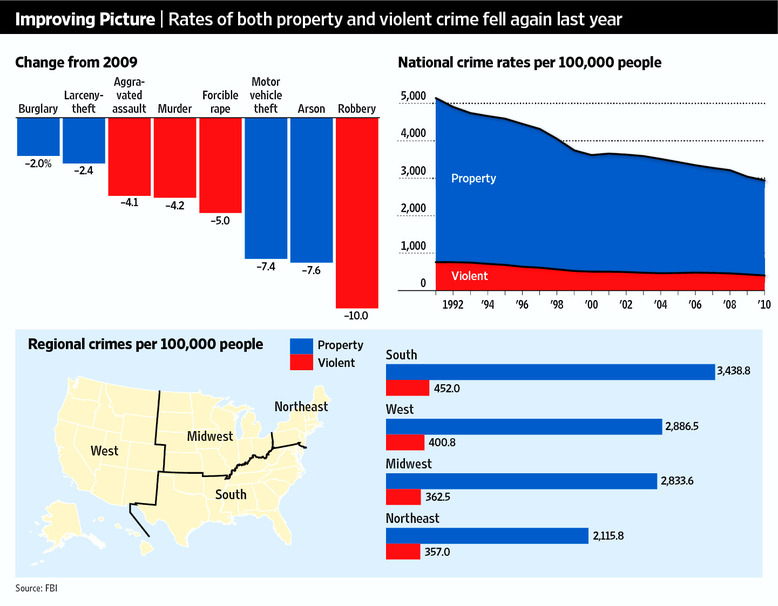 It is difficult to do this succinctly, so please pardon me for the length of what follows.  Nevertheless, I wanted a ready-made, comprehensive list of examples to cite as this discussion continues.

News followers may have noticed that the annual FBI Uniform Crime Report (UCR) was released this week.  This year’s UCR shows that violent crime decreased for the fourth straight year, while property crime declined for the eighth straight year.  To many in the media, for whom the leading if not exclusive explanation of “street”crimes (as opposed to organized and so-called white-collar crimes) is poverty, these declines in the midst of a severe economic crisis are confounding.  That is, these reporters and commentators – with some willing accomplices in academia – continue to report that “experts” keep expecting rises in crime because, after all, they believe and argue, people steal and commit acts of violence first and foremost as a result of their socioeconomic status.  As such, given the sky-high unemployment rate and the like, using their logic we should have begun seeing (perhaps significant) rises in crime the past few years.  Thus, this week’s reporting often included quotes from Alfred Blumstein, the J. Erik Jonsson University Professor of Urban Systems and Operations Research at Carnegie Mellon University‘s Heinz School of Public Policy.  For instance, the Philadelphia Inquirer reported that Professor Blumstein said, “Everyone anticipated the recession would drive things up, and it hasn’t happened.”  “Everyone anticipated…”?!!  Ha!  Uh, no.  Perhaps he meant to say that “everyone” predisposed to believe crime is inextricably linked to socioeconomic conditions – independent of all sorts of behaviors, policies, and phenomena – “anticipated the recession” would drive the crime rate up.  Others (who are data-driven!) learned long ago that a causal relationship between economic conditions and crime rates, at the macro and micro levels, is anything but clear.

Unfortunately, this rationale – though predicated more on ideology than on evidence, and wildly uninformed – is nothing new.  This theme has dominated media reporting of the nation’s crime rates for at least the past twenty years, and it does a disservice to the public which relies upon the media and its quoted “experts” for historical and sociological context when it comes to phenomena such as crime.  It is this reporting, of course, which is used by the masses to form opinions upon which they’ll lend their support (in various fashions) to initiatives (ostensibly) crafted to reduce crime.  As such, I thought I’d offer a retrospective on what has passed for reporting on crime rates so that others may be informed going forward (emphases mine).

For starters, here is the New York Times coverage of what was the latest crime stat reporting:

“Striking,” said Alfred Blumstein, a professor and a criminologist at the Heinz College at Carnegie Mellon University, because it came “at a time when everyone anticipated it could be going up because of the recession.”

To demonstrate how consistently the New York Times has reported this theme, consider the following articles, each of which was penned by Fox Butterfield back when he worked for the Times (much more on Butterfield’s crime rate reporting appears below):

For the third straight year, the rate of serious crime in the United States showed little change in 2002, dropping by a mere 1.1 percent, according to an annual count issued yesterday by the F.B.I…Professor Blumstein, other experts and law enforcement officials said they were a little surprised that the crime rate did not rise last year, because there were a number of factors that might have led to an upturn.  These include a poor job market, especially for young people; the diversion of police resources to fighting terrorism; budget deficits that caused cutbacks in social services and prisons; and a growth in the number of young people in their prime age for committing crime.

Crime in the United States remained relatively unchanged in 2002, dropping by a mere two-tenths of 1 percent, a report released yesterday by the Federal Bureau of Investigation shows….2002 was the third straight year that serious violent and property crime were essentially flat after falling sharply in the 1990’s.  But criminal justice experts warned that a number of factors could cause crime to start increasing again rapidly. Among those factors are the downturn in the economy, cutbacks in police forces and the courts because of budget shortfalls, a rise in the number of inmates returning from prison and a larger number of teenagers.

For the first time since 1991, serious and violent crime in the United States increased last year, the F.B.I. reported yesterday…Over all, crime rose 2.1 percent across the nation, the report said. Experts and law enforcement officials said the overall increase, after a decade of drops in the crime rate, appeared to reflect several factors: a faltering economy, cuts in welfare and anticrime programs, as well as fewer jobs available, more inmates returning home from prison, an increase in the teenage population, and police resources diverted to antiterrorism efforts.  In addition, the experts said, after 10 years of decreases, in which the crime rate dropped to its lowest level since the late 1960’s, it would have been hard for it to keep falling.  “We all knew that the marked downward trend of crime in the 90’s could not continue indefinitely,” said Alfred Blumstein, a professor of statistics and criminology at Carnegie Mellon University. “The crime rate really came down very far, and one would have hoped it was an indication of improvements in society, but that didn’t happen. The economy is a big part of the story.“

The number of serious crimes in the United States remained steady last year after an eight-year decline, the longest on record, the Federal Bureau of Investigation reported yesterday. The F.B.I.’s Uniform Crime Report cited preliminary figures for 2000 showing that overall crime nationwide was virtually unchanged from 1999. By comparison, overall crime fell by 7 percent from 1998 to 1999, and had fallen by similarly large amounts consistently since 1992…Professor Blumstein suggested that one new strategy, now that the economy had sputtered, would be to focus more attention on preventing young people from becoming involved in crime, especially by finding jobs for them.

A few comments that apply to many news articles discussing the crime rate is necessary.  It is remarkable – and troubling – how often reporters loosely state that “experts” say, X, Y, or Z, when, in fact, a single “expert” is cited in the piece (not to mention that no supporting evidence is demanded from the lone “expert”).  That the mantras and themes don’t change, especially when the expectations are not met as data become available, says as much about the media as it does about the “experts” they rely upon.

In addition to the uncritically-accepted economy-crime causation theme, there was the more laughable trope offered by the New York Times and its reporter Butterfield.  For years, Butterfield wrote of his confusion about the “paradox” of the prison population increasing “even as” or “despite” crime rates falling. Here are some tidy examples of how the (formerly?) influential newspaper reported on crime rates in the U.S. dating back to the 1990s, when the country began experiencing its historic crime drop (Butterfield’s reporting ended in 2005, hence the most recent offered example as November 2004).

The number of inmates in state and federal prisons rose 2.1 percent last year, even as violent crime and property crime fell, according to a study by the Justice Department released yesterday. The continuing increase in the prison population, despite a drop or leveling off in the crime rate in the past few years…In seeking to explain the paradox of a falling crime rate but a rising prison population…

The nation’s prison population grew 2.6 percent last year, the largest increase since 1999, according to a study by the Justice Department… The jump came despite a small decline in serious crime in 2002…

The number of inmates in state prisons fell in the second half of last year, the first such decline since the nation’s prison boom began in 1972, says a Justice Department report released yesterday.  The decline was modest, a drop of 6,200 inmates in state prisons in the last six months of 2000, or 0.5 percent of the total, the report said. But it came after the number of state prisoners rose 500 percent over the last three decades, even growing each year in the 1990’s as crime dropped…

After an eight-year drop in crime, the population of the nation’s state and federal prisons grew last year at the lowest rate since 1979, 3.4 percent, the Justice Department reported yesterday…the prison population has increased even as crime has declined…

Despite seven straight years of falling crime, the number of inmates in the nation’s jails and prisons climbed again last year, to a record 1.8 million, the Justice Department reported.

The number of inmates in the nation’s jails and prisons rose again last year, to a record 1.8 million, though crime rates have dropped for seven consecutive years, the Justice Department reported yesterday…Another factor driving up the number of inmates even as crime seems to be falling…

The nation’s prison population grew by 5.2 percent in 1997, according to the Justice Department, even though crime has been declining for six straight years…

Despite a decline in the crime rate over the past five years, the number of inmates in the nation’s jails and prisons rose again in 1997…The continued divergence between the shrinking crime rate and the rising rate of incarceration raises a series of troublesome questions…

It has become a comforting story: for five straight years, crime has been falling, led by a drop in murder. So why is the number of inmates in prisons and jails around the nation still going up?

The rapid growth in the number of people in the nation’s jails and prisons slowed last year for the first time in a decade, according to a study released yesterday by the Justice Department, reflecting at least in part a decline in the crime rate over the past five years. …the incarceration rate has continued to increase even as crime has fallen…

I’m sure there is more to chronicle about all of this (including still other examples), but that will have to do for now!

@spgauthor Well if it isn’t “Blood Brothers Inc.” himself? I LOVED that book, it was such a great read!!!

Will be interesting to see how true to history this is

You can learn how Muhammad Ali earned the nickname "The Greatest" when #MuhammadAliPBS premieres this Sunday at 8/7c. http://pbs.org/ali

Justice Department Approves Remission of Over $32 Million in Forfeited Funds to Victims in the FIFA Corruption Case | OPA | Department of Justice https://www.justice.gov/opa/pr/justice-department-approves-remission-over-32-million-forfeited-funds-victims-fifa-corruption