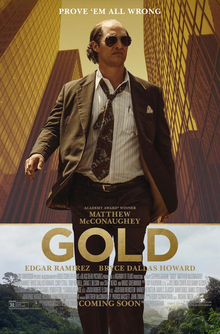 The first time I caught the trailer for the new Matthew McConaughey movie “Gold” it was wildly obvious to me it was based – however loosely – on one of the most compelling crimes or criminal conspiracies about which I have ever written.

I became very familiar with the Bre-X machinations when my friend and mentor Alan A. Block and I were vigorously researching the penny-stock fraud phenomenon which took off (again) in the 1980s and 1990s.  The scams were predominantly based in specific geographic regions within the U.S., and our focus was on Pennsylvania and especially on New Jersey, home to Robert E. Brennan’s First Jersey Securities.  In short, as to how Bre-X, a Canadian mining stock, factored considerably into our work, please consider:

In the United States the historical lineage of penny-stock dealers goes back to the nineteenth century gold and silver mines of the American west, in particular to the Colorado gold rush in the 1880s.1  Prospectors had little capital and turned to selling shares to finance their ventures.  Those unable to lure more substantial investments sold shares for as little as a penny.  Penny-stock mining frauds operated in other countries as well.  For instance, in 1888 a Welsh gold-mining firm swindled investors after a phony ore test in “the presence of certain notable personages.”2

On the heels of the nineteenth century miners came the oil and gas promoters.  Oil, like precious metals, made people more than a little money crazy and by 1918 towns like Fort Worth, Texas, were home to motley armies of “lease sharks, grafters and grabbers, operators, speculators, and gamblers.”3  In the western mecca of Los Angeles, the Department of Justice figured that stock swindlers hawking oil securities of one kind or another, many for little more than $1, were making about $100,000 a week in 1923.4

Up until the stock market crash in 1929 and the subsequent Depression, stock swindling in general was an American pastime, and there was nothing fundamentally different about penny-stock frauds than other security swindles.

Though Alan and I (together and independently) have written explicitly about Bre-X in various publications, none of that is particularly helpful here.  However, as a tidy primer to the unreal case study – which, like many “white-collar” crimes, did not begin as a criminal conspiracy, here is the formal entry written by Hongming Cheng for the complex scandal as it appears in the Encyclopedia of White-Collar and Corporate Crime (London: Sage, 2005, edited by Lawrence M. Salinger, pp. 109-110):

BRE-X MINERALS LTD. was a small Canadian gold exploration company that committed the world’s biggest mineral stock fraud in history. Bre-X became the star of investors in the gold industry after it announced a major gold deposit discovery, perhaps the largest ever discovered, in properties it was mining in the Busang area on the island of Borneo in East Kalimantan, Indonesia. It was later dis- covered that little, if any, gold was actually found in these properties. Some people, including insiders, became quite wealthy from the stock-play. The Bre-X fraud has been the subject of at least six books published about the scandal.

The Bre-X tale began in 1993, when David Walsh, a veteran stock promoter, traveled to Indonesia and met John B. Felderhof, a well-known geologist, who convinced Walsh to bet his company on Busang. In August 1993, Bre-X began to explore in the Busang area, and was reporting favorable drill results.   By early 1997, it claimed to have proven the existence of 71 million ounces of gold, worth about $25 billion, and estimated that there was at least 200 million ounces present at Busang. As a result, the Bre-X stock rose so high that it qualified for inclusion in the TSE 300, which caused index funds and all portfolios tracking the index to purchase the stock. To produce such a huge deposit, the Indonesia government required that Bre-X share some of the fortunate excess with the people of Indonesia, and with Barrick, a firm tied to Indonesian leader Suharto’s ambitious daughter Siti Rukmana.

But Barrick could not negotiate a deal acceptable to all parties. With Suharto’s close confidant Mohamad “Bob” Hasan stepping in with the deal, the American firm Freeport-McMoRan Copper & Gold was eventually selected as Bre-X’s partner in the Busang project. Freeport first undertook its own due-diligence drilling and reported that its analyses of seven core samples “indicate insignificant amounts of gold.” That news came one week after the announced death of Bre-X’s chief geologist Michael de Guzman, who reportedly fell to his death from a helicopter while traveling to Busang to meet with Freeport’s due diligence team to discuss Freeport’s assay results. Forensic Investigative Associates conducted an independent investigation into the scam and concluded that the company had “improved” the samples from the time they were collected until they were turned over to a down-river lab for analysis. Forensic Associates believed Walsh (and the other Canadian employees) did not know about the samples. The next day, the $6 billion (Canadian) Bre-X stock lost almost all of its value.

An independent company, Strathcona Mineral Consultants, was commissioned to conduct an independent study of the situation. After their study, Strathcona concluded that “an economic gold deposit has not been identified in the South East Zone of the Busang property, and is unlikely to be.”

Prior to the disclosure of the truth, Walsh and Felderhof sold large amounts of their personal stock in Bre-X, reaping millions of dollars for their own benefit and at the expense of Bre-X investors, who lost about $3 billion when the scam was revealed in the spring of 1997. This incident caused a massive shattering of investor confidence and tarnished the reputation of the securities industry.

Anyone wishing to research the scandal in earnest needs to start with the work of Diane Francis, author of Bre-X: The Inside Story [Note: I am aware of other efforts but they don’t measure up in my opinion]. 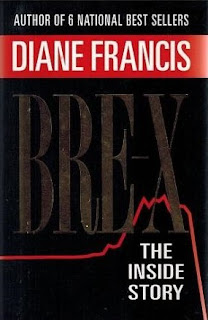 Oh, one last (and trivial) thing – that research introduced me to one of my favorite lines, for which there are multiple variations:

“A gold mine is a hole in the ground with a liar at the top.”