Gaming the Game: The Story Behind the NBA Betting Scandal and the Gambler Who Made It Happen (Barricade, 2011)

Home » Gaming the Game: The Story Behind the NBA Betting Scandal and the Gambler Who Made It Happen (Barricade, 2011) 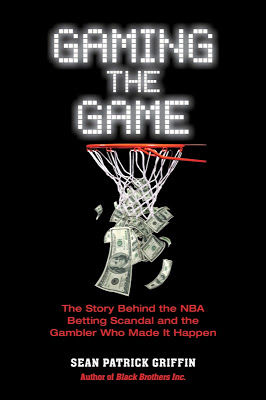 “An exhaustively researched book threatening to overturn some
comfortable assumptions about the NBA’s referee scandal …
[Gaming the Game] delivers the intrigue you’d expect from
a true crime thriller”
ESPN.com’s True Hoop
“[This] important new book … offers a full picture of how
the world of big-time sports gambling operates”
The Painted Area (an official ESPN.com NBA blog)
“A book you can bet is worth reading…
fascinating…a complete effort”
Delaware County (PA) Daily Times
“a tremendous read…fascinating…gripping…a must read for any bettor serious about the global marketplace…by far the most believable [account of the NBA betting scandal]”
Covers.com

“If you’ve ever wondered what the REAL story was behind Tim Donaghy and the NBA betting scandal, this is a must read…If you’re interested in sports betting, you won’t be able to put [Gaming the Game] down.”

“compelling [and] many leveled…the research behind Gaming the Game is impressive…Griffin’s knowledge of the crime scene in and around Philadelphia illuminates Gaming the Game…He’s a fluid, crisp writer and an A-1 historian of crime [who] combines an eye for human detail with the ability to convey broad social themes.”
Blogger News Network

“An outstanding read that might make you change the way you view professional sports.”
Beyond the Bets

Highly Recommended”
Gambling Book and News
“Few people are as qualified as Griffin to write this book…[his] scholarly background is evidenced in his research, which is flawless, a remarkable feat considering the subject matter…If you’ve ever wanted to know how the big-money betting outfits work, this is the book for you. If you’ve ever wondered about the true story behind the Tim Donaghy scandal and how much of the truth are we being told, this is also the book for you. Griffin gives readers the best of both worlds with Gaming the Game. His academic background ensures that readers will get all of the information that they need, but he is also a gifted story teller and writes in a way that will have you glued to the pages. This is easily one of the best books ever written about the sports betting scene and will give you a first-hand look at the biggest scandal to ever hit the NBA.”
About.com
“Griffin curates FBI files, interviews,
statistics and court documents, providing a narrative so vigorous and
complex that readers are practically courtside.  The cast of characters
— bookies, refs, cops, and the infamous Donaghy — come to life like
players in a true crime novel”
Biographie

In June 2007, the FBI informed the NBA that one of its referees, Tim Donaghy, was the subject of a probe into illegal gambling.  Within months, the public knew the broad outlines of a scheme involving Donaghy betting on games he officiated with a co-conspirator, longtime Donaghy acquaintance and professional gambler Jimmy “Baba” Battista.  They were joined in the scandal by a mutual childhood friend, Tommy Martino.  By November 2008, each man had pleaded guilty to charges relating to the conspiracy, and was in federal prison.  The story was over.  Or so it seemed to be.

Researched with dozens of interviews, court documents, betting records, referee statistics, and unique access to witness statements and confidential law enforcement files, GAMING THE GAME looks inside the FBI’s investigation and beyond to provide the definitive account of the scandal.  Jimmy Battista’s remarkable decades-long bookmaking and betting career is examined, including and especially his role as architect of the widely publicized scandal.  Battista, who – unlike his co-conspirators – never spoke with federal authorities, reveals for the first time the intricate details of the scheme, most of which only he knows.

GAMING THE GAME deals explicitly with numerous previously unknown aspects of the NBA betting scandal, including:
·         Pro gambler Battista’s discovery of referee Donaghy’s bets on games he was officiating, and an examination of what pro gamblers, led by Battista, were doing with this information for years before Battista and Donaghy ever agreed to their own illicit deal.
·         Details of Battista’s relationships with co-conspirators Donaghy and Martino dating back many years, including the extent of their involvement together in the betting world.
·         The unraveling of the NBA betting conspiracy, including the behind-the-scenes details of Battista’s indictment, arrest, and negotiations with federal authorities.
·         An explanation of why federal law enforcement officials never alleged referee Donaghy fixed games, and why they came far short of concluding he didn’t.
·         The first ever discussion of why pro gamblers wagered millions on games Donaghy officiated and bet, and the compelling evidence which supports their contentions that Donaghy influenced game outcomes when his bets were at stake.
Among other non-NBA betting scandal matters also discussed in GAMING THE GAME are:
·         The trying – but ultimately and ironically fortuitous – mix of Philly mob extortion and local law enforcement heat that forced Battista’s move from Philadelphia’s suburbs to Las Vegas, without which his meteoric rise to the top of the betting world could never have occurred.
·         Inside accounts detailing the highest levels of the Las Vegas-based international betting scene.
·         A mind-boggling look into the big-time offshore sports betting infrastructure and its operations within the U.S., including the daily, secretive movement of millions of dollars.
·         A fascinating discussion of the world’s tight-knit fraternity of heavy-hitting sports gamblers.
·         The mechanics of wagering millions of dollars on a particular bet, which few people have ever understood – and even fewer could pull off (for a host of reasons beyond acquiring the funds).
Other praise for the work:

“Absurdly fascinating” – Isaac Ropp of the “Primetime with Isaac and Big Suke” program on1080 The Fan, ESPN Radio (Portland)

“I strongly urge people to go out and get this book…really fascinating stuff “ – Gill Alexander (“ The Betting Dork,” Pregame.com)

“A classic…riveting…read the book, you’re gonna love it” – “Philly Godfather,” professional gambler and host of “The Breakdown” program on 97.5 The Fanatic ESPN Radio (Philadelphia)

Related Links for GAMING THE GAME: