Since this blog is being created roughly four years after the research and writing for what became Black Brothers, Inc.: The Violent Rise and Fall of Philadelphia’s Black Mafia, I thought it might be helpful to place some historical context here for interested parties.

I wrote an academic text entitled Philadelphia’s Black Mafia: A Social and Political History (Kluwer) that was published in 2003.

The text was an extension of my Ph.D. dissertation, and thus was written in the expected academic prose. Further, unlike many mainstream reads, the text was designed to answer certain historical questions (e.g., is/was there such a thing as African-American organized crime, and if so, to what extent is crime “organized”, etc.). Though I am proud of the work, I understood why those outside the world of academia found the reading something short of scintillating. Indeed, even as I wrote the text, I kept a folder of notes on how the book in general, and how certain narratives in particular, could have been written much differently for a wider audience outside the academy. At the time, these notes (some of which were literally written on napkins) were nothing more than concepts for reflection some years down the road. That was, until Milo Books owner (and true crime author) Peter Walsh comically found PBM (this is its own story, especially when you consider Milo is based in the UK). A read of the book led Walsh to conclude I had much more data than I used in the study (which was true in ways he couldn’t have imagined), and that many aspects of the story lent themselves to a more mainstream book.

Mr. Walsh contacted me about the prospects of doing a wholly different book on Philadelphia’s Black Mafia, and sent me a list of several ideas he had when he read PBM. It was if he had seen my notes (and napkins)! We soon agreed on the basic framework for the new book, and were greeted by an unbelievable set of circumstances. Just as Walsh and I were completing the outline for the as-yet-untitled manuscript, a massive federal corruption probe of Philadelphia’s municipal government became hot news, and one of the main characters played a significant role in the Black Mafia history. Thus, Black Brothers, Inc. would not only tap into the known history (though told in a much different manner), it would take readers up to the present and provide them with the best – indeed, the only – explanation of the city’s corruption probe.

The writing of BBI was very difficult in that the book was two-in-one, really. Milo and I seriously considered splitting the project into two books – one largely focused on the Black Mafia and its brutal violence; and another focused more on the current corruption scandal. Certainly, this would have made for much easier reading. I decided to keep the complex story, with its characters numbering in the dozens and its history spanning forty years, in one book because I feared parsing the story would not allow readers to grasp the few degrees-of-separation between members of the so-called under- and upper-worlds. My argument for some time now has been that the media and my academic colleagues make too much of the distinction between “organized crime” and “white-collar crime”. Very few significant criminal enterprises exist for any period of time without the artful assistance of lawyers, accountants, financiers, and the like, not to mention the corruption of public officials. By keeping the entire cast of characters in one book, however dense it became, at least readers would grasp the totality of the story.

One last decision that affected the book concerned documentation. As my students most certainly know, I take footnoting and citations quite seriously, especially in an area such as organized crime which is prone to much sensationalism and mythology. Furthermore, the Black Mafia story includes its share of controversial characters and history, requiring more documentation than usual to instill confidence in the accuracy of the read. By adding a considerable amount of documentation we risked detracting from the feel of a readable, mainstream true crime book, which of course was the goal in the first place. Notwithstanding the decisions to produce one book instead of two, and to include a significant number of footnotes (104 pages of the 464-page book), we were fairly satisfied with the book when it hit shelves in July 2005. 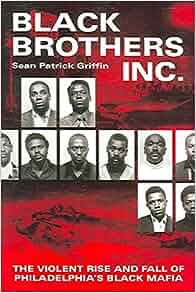 Still amazed at this a day later. For those who wind up debating friends, co-workers, family members, etc re the NBA betting scandal, THIS is why you’re fighting an uphill battle. Donaghy’s sensational tales serve many interests to various parties.

Honoured to lead a one-day special session on match-fixing, money-laundering and illegal gambling in Las Vegas this week with the great Chris Rasmussen - Feb 2nd at City Hall.
2 Fascinating speakers - an ex-match-fixer and Tim Donaghy, the NBA referee who bet on his own games.

All without the overwhelming evidence Donaghy *fixed* games

Honoured to lead a one-day special session on match-fixing, money-laundering and illegal gambling in Las Vegas this week with the great Chris Rasmussen - Feb 2nd at City Hall.
2 Fascinating speakers - an ex-match-fixer and Tim Donaghy, the NBA referee who bet on his own games.

Lol DPP getting the week started

The NFL is not rigged.