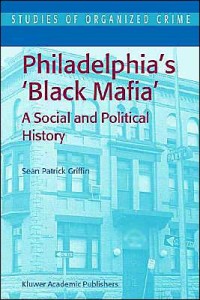 Philadelphia’s ‘Black Mafia’ could be used as primary reading in deviance and organized crime courses. Academicians in the fields of criminology, sociology, history, political science and African-American Studies will find the book compelling and important.

This book provides the first sociological analysis to date of Philadelphia’s infamous “Black Mafia” which has organized crime (with varying degrees of success) in predominantly African-American sections of the city dating back to the late 1960′s.

* This is an academic textbook suitable for undergraduate and graduate courses.

“Philadelphia’s Black Mafia is a path-breaking book on the history of urban criminal groups…The book’s strength is the historical perspective that comes from examining the multiple activities and the important changes in the group during its thirty-year history. The book’s rich detail reflects the variety and quality of the sources that Griffin gained access to… Philadelphia’s Black Mafia is a careful, well-researched study that is an important contribution to scholarship and a revealing book to read.”

“Sean Patrick Griffin has taken a mountain of data, mined it carefully, presented it in a clearly and compelling written book. This is sociological research at its best and most basic, presented in a fashion that is imminently readable and unapologetic in its originality. Philadelphia’s Black Mafia, A Social Political History will take its place as a required book on the shelves of all serious students of organized crime.”

“Griffin…goes beyond the stereotypical analysis of Italian-American gangsters and examines an African-American criminal group – a largely ignored topic….This book makes a significant contribution to organized crime research and presented in a clear and concise matter…[and] should be of great interest to students of organized crime and gangs and to those interested in African-American studies…This book plays an important role in identifying social structural conditions that fuel the development of modern-day organized crime.”

“…an important contribution to the study of organized crime for two reasons. It removes a white spot on the map with respect to African-American organized crime, and at the same time it adds significantly to our knowledge of the overall crime picture in Philadelphia from the late 1960s through the mid 1980s.”

“Griffin’s research is mind-boggling, in the best sense. He has rendered Philadelphia and the United States a valuable historical document.”